Hi, welcome to my blog today…and today I’m talking about playing Cajun and Creole music on different instruments. So this was actually the first instrument that I learned to play when I was a kid. It’s called a cello and it’s a big violin basically. But recently I’ve been teaching a couple of cello players around Lafayette, Cajun and Creole music on this instrument. I started out playing some classical music as a kid but got into Cajun fiddle music and folk music and got away from classical music. I still play the cello but I play mainly Creole music and Cajun music on it.

So anyway for those of you out there who do play cello or other instruments, it’s fun to try to play Cajun tunes on different things. It doesn’t have to be always a fiddle, accordion, or guitar.  It can be a woodwind instrument or a brass instrument so try it; it’s a lot of fun!

Yeah I’ll play this tune, this is really cool, it sounds really good on here. It’s just some one-steps that Canray Fontenot played, so I call them Canray’s One-Steps, so it goes like this…[1:27]

So anyway this is a lot of fun because on the cello I can do some things that I can’t really do on the fiddle. It’s kind of like playing the fiddle upside down, so I’m getting some different strings that I wouldn’t normally use on the fiddle, so it’s a lot of fun. So I guess the point in my blog today is that if you play other instruments but you love Cajun music don’t feel like you just have to play them on an accordion or a fiddle or a guitar. Feel free to try different things. It could be a keyboard, a synthesizer…I mean I think the whole point of Cajun music is that when it was invented, who knows when or how or what, people just played music with what they had. I think it’s still fun to do that, and the cello sounds great.

I’ve tried to play a jam before and second, like a fiddle and second while the accordion is playing. I’m not really good at that; I didn’t really find it worked that well for me. So I like playing the melodies on it, you can get some nice drones…[4:25]…and it’s really fun with another fiddle and a guitar, I find that works good, but it also works with an accordion. The great thing about cello is it’s almost like a double bass too so you can…[4:41]…you can do bass lines on it just with the pinsacatta so that’s kind of cool.

So anyway I just thought I’d share this with y’all, kind of let y’all know what I’ve been doing lately. I’ve got a couple of students on cello and it’s been fun. So who knows? You know, the cello may stick around in Cajun music, hang around,  whatever, it’s fun and if there’s any of you cello players out there who ever want me to post breaking down Cajun or Creole tune, just let me know. So I’ll play another one…I’ll do this one; it’s called Freeman Fontenot…[5:46]

Alright! This is fun…this is so much fun! My other good friend Jonno Frishberg plays viola and that’s another thing I just thought about, he plays a lot of Cajun and Creole stuff on viola; sounds great! (Here’s a picture of us one night after practicing a tight set of Cajun and Creole standards on cello & viola in preparation for Mustaches & Music: A Benefit for the Mercury Phoenix Trust, https://www.mercuryphoenixtrust.com for more info.) 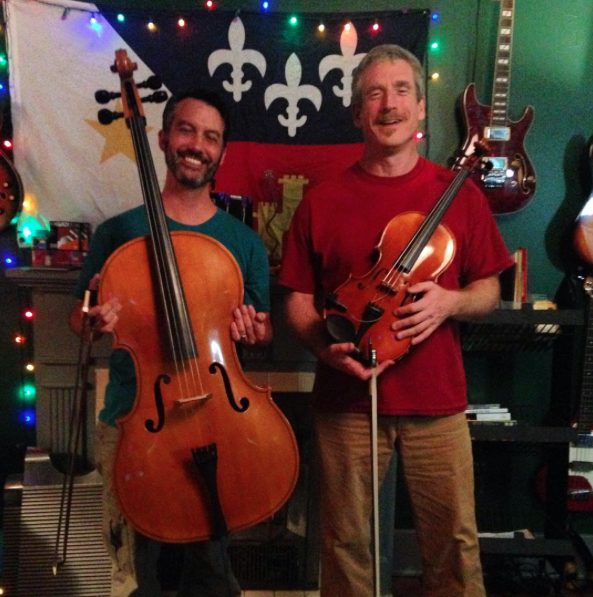 And then Michael Doucet who I play with, he’s played and recorded some stuff on the octave violin, the violin with octave strings on it which is much like a cello or viola. So check out some of that stuff; it’s really cool. So I find Creole music especially has a great feeling in the low register, there’s something about that music in the low register that just feels good, feels right.

So check it out: Thanks so much for joining me today with my blog. I just wanted to share this one with you, again it’s just something I’m doing and it’s a lot of fun. So I hope everybody had a great Christmas and has a Happy New Year and see you out there soon. Thank you.

I will never share your info or spam you